We see her in the distance, shimmering in the changing light. As she moves closer, individual shapes become more apparent, more enticing. The play of light and shadow across her smooth and silky skin is so inviting, as the lens caresses every line and curve of her elegant, youthful body.

Welcome to a car commercial. You could change the gender and a few of the adjectives and make the subject masculine, but the purpose would be the same. Sex appeal. It sells and it's the main theme of most automobile advertising in one way or another.

There are a lot of drop dead gorgeous car commercials being seen on television today, but the art of lighting automobiles is nothing new really. The art of lighting car bodies is as old as our understanding of how to paint or draw photo-realistic images, which involves a thorough understanding of the interplay of light and shadow on objects, textures and surfaces in the real world. Detroit automotive designers there were using "the sheet", as it was called, at least as early as the 1920's. The "sheet" was just that. A sheet of white muslin or cotton which was held and moved by two or more people, while illustrators viewed the subject, seeing where the reflections actually began and ended. Thus they could realistically illustrate how an automobile would look, sitting outside, with nothing but sky and sun above. This was later applied to press release photography and eventually became an obvious tool for advertising photography.

Of course a good designer or illustrator could also fairly easily predict where sky and horizon would meet on plane shapes, but the sheet was a big help where curves were concerned. Later, certainly as early as late '40's or early '50's, as compound curves became more common, the designers began using a very large, overhead "bounce panel" as they called it. The bounce panel was a more elaborate version of the sheet, where an entire design showroom was hung with muslin. Ceiling fixtures protruded through the muslin, directing their light upward, to create a huge bounce source which was large enough to wrap around the ever more complex shapes. Not at all unlike a typical studio shot for modern cars. So the way automobiles are lighted and photographed today isn't new, it's just perhaps a bit more refined and certainly more excitingly photographed.

Modern automobile body design today is described by designers as "tense", meaning the lines and curves change shape often and thus create more unpredictable results where reflections are concerned. This is because many complex shapes are being blended seamlessly, as though a membrane has been smoothly prodded into one continuous, compound shape. These shapes provide very unconventional reflective patterns and have given rise directly to the idea of "liquid light", where the reflections flow continuously from one shape to the next as the viewpoint changes, rather than starting or stopping or changing shape abruptly where one surface ends and another begins.

My general approach to lighting a car is first to think of the car as a large, complex mirror. Sort of like a Fun House mirror which distorts lines and shapes. If you were to attempt to light a mirror, even a flat one, how would you do it? The answer is, you can't. Light falling on a mirror is invisible. It is the light falling on objects "reflected" in the mirror that is important. And if the mirror is distorted, then the things it reflects can come from the craziest places. These factors are what make car lighting such a challenge.

You can make a pretty good mirror by putting something black behind a clear, shiny, reflective surface such as glass. If you place anything with color behind the glass, it will absorb other colors and reduce the quality of the reflection accordingly. If you put something white behind the glass you will all but eliminate the surface reflection because the light will be so strongly reflected from the white that the image on the surface of the glass will be washed out. This is the key to understanding why a shiny black cars look so great when they have something to reflect - the sky, other lights, anything bright.

Follow these links for details on commercial shoots for:

Notes on the Art & Craft of Photographing Cars 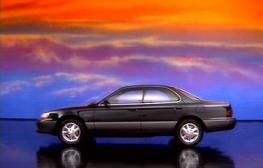 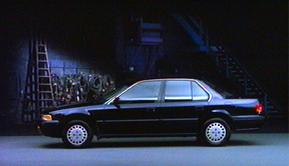 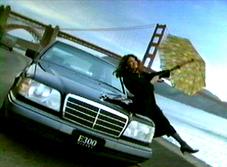