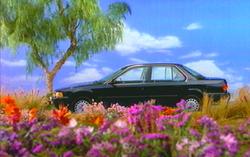 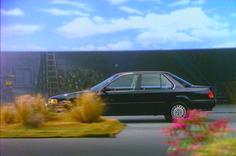 A version of this article was published in the October 1994
International Photographer Magazine
© 1994 Charles L. Barbee. All rights reserved. 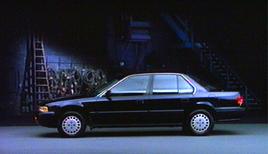 When I shot a pair of Honda commercials for Robert Elen & Associates, Advertising and James Kellahin Productions, we had two completely different looks designed by the Agency. One was a Redwood forrest in Northern California, primarily in natural light and the other, called "Take It Away", was shot entirely in studio and was a lighting and mechanical effects challenge.

"Take It Away" was designed to visually illustrate the idea that the new Accord looks just great - even without a lot of frills. The agency developed the concept of placing the car in a beautiful meadow. As the VO announcer extols the virtues of the no-frills car, the sky, the meadow and everything in them (the visual "frills"), all literally disappear piece by piece, until the only thing left is a great looking, sexy black car, in a pool of flattering light, on an empty sound stage - fade to black.

We shot "Take It Away" on stage 2 at Warner Brothers because its size and its permanent motorized lighting arbors and dimming system made it possible to rig and shoot in far less time than would normally have been the case. The accompanying diagrams will help to understand the setup. The accompanying pictures illustrate the results.

The "Take It Away" spot required that the car be literally sitting in front of a big willow tree in a flower filled meadow, on a bright sunny day; with a beautiful blue sky full of puffy white cumulus clouds in the background. The lighting look is bright, sunny, direct, hard. As we're looking at the car the meadow begins to disappear, literally, in pieces. The tree, behind the car, begins to roll offstage camera right; the middle ground of meadow and flowers in front of the car rolls offstage, camera left; the foreground of meadow and flowers rolls offstage right while the sky begins to move upward and out of the frame. As all this is happening the lighting look is changing too! We're going from that bright sunny look to a very low-key, liquid-light sexy look. A black car, metal and glasswork glowing white in all the right places, in a soft pool of light on a deep gray floor. The cavernous stage looms deep in the blue-black shadows behind the car. In the far corner we can just make out the wooden stairway leading up to the perms, and the shapes of a ladder and cable bundles hung from the wall. In the left of frame, on the stage wall, is a patch of sunlight caught shining through the massive stage door. As the spot ends, the stage door slowly closes, cutting off the patch of light. With a low rumble and a final thud, we go to black.

The whole key to this spot was the setup and rigging of the big elements. My gaffer, Ron McLeish and key grip Steve Mendoza and I scouted the stage before leaving for the redwoods location for the first spot. This gave us time to plan our approach. I like to pre-visualize on paper as much as possible. I suppose it's my early training as an architectural engineer and my drafting experience which taught me expensive mistakes can be avoided by careful planning on paper. Armed with good story boards from the agency, I used a plot of the stage and lighting arbors to begin figuring where to place the car, the backing and the camera. I made all my calculations for lens angle and field of view so that I knew exactly what would be in the frame and what focal length I would use. All the other elements more or less fell into place after that.

It was quickly obvious that we would need to layout on the diagonal axis of the square stage. Doing this would give us a total depth of approximately 140 feet, from corner to corner. Minus the fire lanes that gave us about 120 feet of actual, usable space. We had to hang and light an 80x80 bleached muslin, a 40'x40' black cutter, a 30'x50' sky cyc, and a 30'x50' net, not to mention the approximately 40 lighting units consisting mostly of 5k sky pans and baby 10k's, plus a few juniors. Then the prop and effects crews had to build a Willow Tree, and a meadow, all of which could be rolled and flown out of the shot, smoothly and in just a few seconds. By the time we all were finished we had quite literally filled-up the 110'x100 stage. Suddenly it didn't seem so large.

The camera was placed about 15' in from one corner, on a Fisher 10, with about 8' of track laid out so we could do a slow push to the car as the meadow was disappearing. That way, the final shot of the car would fill the frame a little more. The car was placed about 60' from the lens and the backing another 30 feet behind that. This gave us quite a bit more depth for the lens and it also allowed more room to roll the meadow elements off stage and clear of the frame. But working on the diagonal meant the 35' height of the perms on stage 10 would prevent us from

raising the 30'x50' sky cyc clean out of the top of the frame, because we wouldn't be able to go between the massive trusses. Fortunately, my lens calculations showed that the sky would only occupy the lower 15 to 18 feet of the frame. So we had the rigging crew roll the top of the cyc until it was only about 15' high and this gave us enough room to clear the top of frame when the cyc was hoisted. Since the net was always in the shot (though invisible), it could be stretched to its full 30' height.

Another important consideration for this spot was depth of field. Even though the flowers closest to the lens could go a bit soft, we basically wanted everything in focus from front to back. But I also wanted to work at a fairly good "portrait" focal length since that would favor the car. I also wanted to compress the image somewhat, to help blend the foreground and middle ground greenery. The best compromise between compression and depth of field was 50mm at t5.6 on the Ziess 5:1 zoom. I normally shoot with Eastman stocks and would have chosen 5248 for this shoot. It's not a big thing with me it's just that I know I can rely on Eastman stocks and I usually adhere to the theory that the devil you know is better than the devil you don't. I have the same theory about labs, too, but that's another story. But the Director and Agency both liked the look of Fuji 8530 (EI 125 Tungsten). Because of that, and the slight speed advantage over 5248 (EI 100 Tungsten) I agreed to go with the 8530 and I have no regrets. Since we were shooting at t5.6 it meant we had to light to a fairly high level of about 300fc.

When we returned to Burbank after the redwoods shoot, the stage had been loaded with most of the lighting and other equipment, and the big dolleys which would serve to roll the "meadow" out of the shot had been built and tested. Because of that and because of the motorized arbors which allowed us to hang and focus many of the lights from the stage floor it took only a day and a half to rig and light everything so that the mechanical effect of the meadow, tree and sky literally flying out of the shot and the massive lighting change from sunny day exterior to low-key stage interior, could take place without a hitch.

The lighting setup was fairly straight forward. We rigged sixteen 5k Sky Pans over the Bleached Muslin and six 10k's from the floor, to create the seamless white overhead source. We placed another eight 5k pans on the sky cyc and raked the entire net with a 10k from either side, to create a little "atmosphere" between the car and the "sky". For the opening of the spot we needed a hard sunlight "source," so we blended several more 10k's into a single "sun" which appeared to be coming from about 11 o'clock and slightly upstage of the car. This gave a nice edge to everything which we cheated even further on the car by edging it from both sides and the top. So much for the bright, high noon look.

When the meadow begins to disappear, and the look changes to low key and sexy, virtually all of the hard light was dimmed out. It was particularly nice as the big 10k's, which were raking the net began to fade, just as the sky cyc was clearing the frame. The fading of the 10k's let the net be more transparent again and the two actions combined to reveal the back stage area in a very lovely way. After the fade, all that remained were the 10k's and Pans lighting the muslin, a 10k rigged up high to throw the shaft of sunlight on the stage wall, and two Juniors lighting the backstage area with a dark blue glow. We also had rigged a few bounce cards with juniors, placed strategically to give us a little glow on the car in places missed by the big muslin, and we had some tubes inside the car, to keep it from going too dark.

In the DRAWING I've indicated a 40'x40' solid black cutter, hung at an angle under the muslin. It would seem to be pointless to hang such a big muslin and then block it out in this way. But this an example of how tricky car lighting can be. The muslin was the first thing we hung and it was positioned to give the reflections we wanted after we had the car positioned. But the floor, which was supposed to be a light gray, was obviously going to be a problem, being directly lit by the hot muslin. So I requested that the floor be painted a shade darker than mid gray and we hung the big cutter to take out most of the light from the muslin which fell on the floor, down-stage of the car. But we couldn't allow the cutter to take any light off of the car, or more accurately, we couldn't allow the cutter to interfere with the reflections of the down stage edge of the muslin in the car's finish. That is why the cutter ended up at such a steep and seeming odd angle. The entire muslin had to be open to the car but not to the floor.

So that was it! After a lot of careful planning and a couple of days of rigging, lighting and fine tuning, everything went off without a hitch. We put the 30 second spot in the can after about 6 takes, on a single 400' roll. The final results were spectacular. We posted at Encore, and the spot, which was originally intended only for Northern California regional use, was so well received by Honda that it was taken national and ran for several months.