"The Thrill of Motion" was a 70mm "Ridefilm" for which I was the Director and Director of Photography.  It was the centerpiece of the General Motors Pavillion in Centennial Park, during the 1996 Olympics in Atlanta, Georgia, USA.

It was designed to be shown in a theater which was cube shaped, 40 feet per side.  The image was projected on the floor.  Tthe audience viewed the film from a narrow platform spanning the width of the theater, against one wall, 20 feet above the floor/screen.   They stood, with hand-rails, 25 abreast, in three tiers, each slightly above the one in front, looking down on the image.  The platform on which they stood was a motion-based platform.  It could roll, pitch and yaw, in synch with the images.  Finally, the interior walls of the theater, to the left, right and in front of the audience, were solid mirror.  Thus what was seen on the floor/screen was repeated to infinity no matter where the audience looked within a horizontal field of view of about 180 degrees.  It was like being inside a kaleidoscope.

The idea for the film and it's special theater were the work of concept designer, Gerard Howland, as part of his overall design for the G.M. Pavallion.   The Thrill of Motion was the hook to get people into the Pavalion.  It had to be designed with "high-throughput" in mind.  Thus it could be no more than 90 seconds long.  My job was to take his concept of 7 specific and somewhat difficult shots and make them flow together in 90 seconds.

The finished film was seen by more than 300,000 people in the roughly 17 days it ran during the Olympics.

The images below illustrate the concept.  The top row are the images as photographed and projected on the floor/screen.  The bottom row shows the same images as seen in a "mock-up" of the theater, constructed on top of a large screen tv.  The point of view is close to what the audience actually saw. 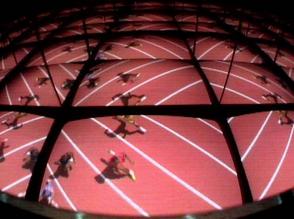 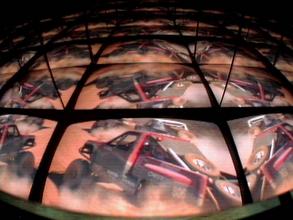 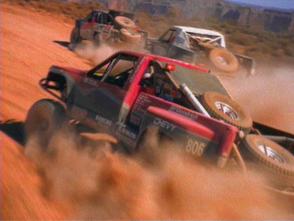 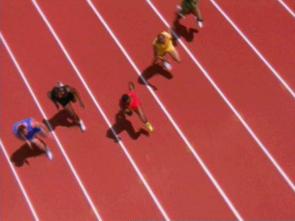 The Making of A 70 MM Ridefilm

"The Thrill of Motion"