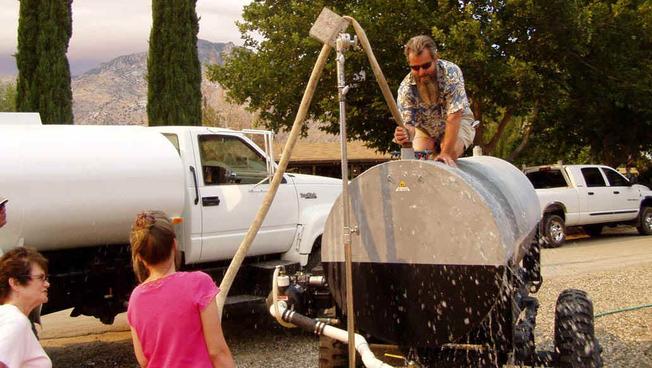 Left, the cast rehearses in the dry daylight what they will be doing in the wet darkness in a couple of hours.  They are huddling in a cave-like shelter similar to the shelter the Smiths must have sought during their ordeal.  Photo by Ron Siemens.  Right, the cast in costume, just prior to the start of shooting.  Photo by Mike Gallagher.

Students have also participated in the more mundane but vital processes of digitizing (scanning) thousands of historical photographs as well as the entire text of Bob Powers’ books, and organizing this material into a database that can be searched, accessed or correlated by name, date, geographic location, etc. The historical photographs will be processed through computer animation software to generate movement and depth into the otherwise still photographs.

The Smith and Powers children play in the rocks above their ranch house, c.early 1900's.  This is the area where the family found shelter during the flood some thirty or forty years earlier.  The great detail in these photos can be seen in the blow-up of the two girls on the right.
Historic photos from the Powers collection.

Many of these photos are so sharp and contain so much detail that we will be able to show things that people have never seen or noticed before. This process of student participation in the making of Wild West Country will continue through an entire two-year curriculum of classes leading to an AA degree in Digital Cinema.

Judging by the response from students, the eight-week summer class was "interesting," "stimulating," "motivating," and "beneficial to someone interested in the movie business."  These comments came despite the fact that we were unable to take advantage of the state-of-the-art Digital Media Center, which is opening as this is being written.

The filming of the historical re-enactment took place on the ranch of Butch and Carol Behm. It’s in the South Fork of the Kern Valley, not far from where the actual event took place. Part of my ‘pitch’ for Wild West Country concerns the unique opportunity we have to record these rich, authentic pioneer-frontier stories in the locations where they actually happened. The story of the flooding of the Smith Ranch in 1868 is one such story. It also happens to be perhaps the hardest shoot we could do and I knew if we could handle this one with our limited crew and budget we could do almost anything.

Keith Pringle and Sherri Ogden and her son, Timothy, who plays Tommy Smith in the reenactment.  Right is Liz Middleworth in white.
Photo by Rod Middleworth.

The next class in the Digital Cinema series, MA C127 – Digital Video Production, will take full advantage of the new digital lab, with over 30 computer stations and four dedicated digital editing suites, all loaded with the latest, state-of-the-art software. The class will lead students through the production of their own three minute videos, from concept through finished product, as well as providing the opportunity to participate directly in the on-going WILD WEST COUNTRY documentary project.

[Return to Table of Contents] 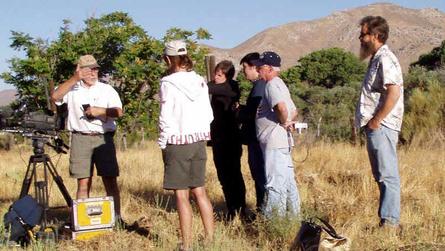 Now we are not only at the end of the first eight weeks of production of the documentary series but we are also at the end of the first eight weeks of classes on digital motion picture production.  The first class, MA C168 – DIGITAL CINEMA, is an overview of the entire process of making a digital motion picture.  Now the KRVEC Foundation's dream of a permanent Cerro Coso campus in the Kern River Valley has assumed a physical presence.  A wide range of classes in digital media will now be offered, under the guidance of Kern Valley resident Jim Kiggens, Chairman of Cerro Coso's Media Arts Department.

​I consider myself a lucky man. I also know that Seneca was right; ‘luck’ demands the hard work of preparation. Yet, as Sandburg said, nothing happens without the dream.  In this case, one dream begat another.

It was the end of 2002 when I moved back to Kernville and started dreaming.  I graduated from high school here in '59 and by '64 was studying film and television at San Francisco State.  From the late '60's to the late '70's I worked steadily producing, directing, shooting and editing documentary television specials, for all three networks.  By the late '70's I was living and working in Hollywood, but specializing as a cinematographer.  But by the end of the 20th Century, I was longing to live in Kernville again and I was looking for a way to get back to my roots as a documentary filmmaker.

Soon after settling into our new home, my brother, Stewart, gave me the full set of the late Bob Powers' books and urged me to read them.  I did so, from cover to cover.  I was hooked.

Below, students shooting interviews with Bob Ramsey (left) and Jack White (right).  Dozens of interviews will be shot for the project over the course of the next year.  Photos by Joe Sevec.

On the 'set' of the Smith Ranch Flood scene from Wild West Country.  This is actually the South Fork Ranch of Butch and Carol Behm, who volunteered the use of their property for the filming of the flood scene.  The Behm Ranch was an excellent place to shoot because of its physical proximity to the old Smith Ranch and because the boulder strewn terrain is exactly the same as that in which the Smiths survived on that cold, rainy night in 1868. 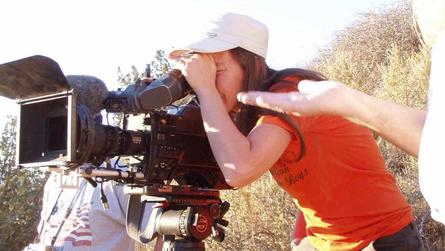 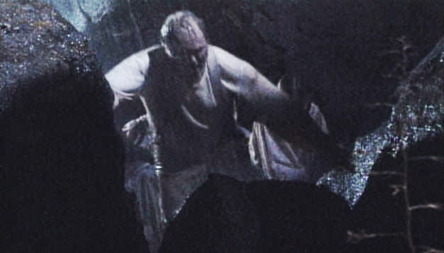 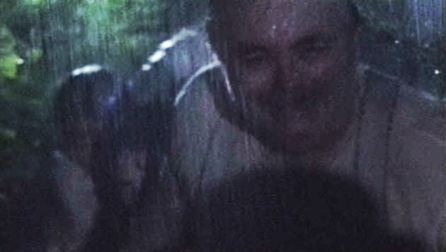 The production of "Wild West Country" is the vehicle through which students can get hands-on experience in the process of making a movie. So far, in addition to classroom sessions and demonstrations concerning all aspects of filmmaking, students have also participated in the shooting of scenic shots, interviews and a dramatic re-enactment of an actual historical event, which will be used in the finished documentary series. 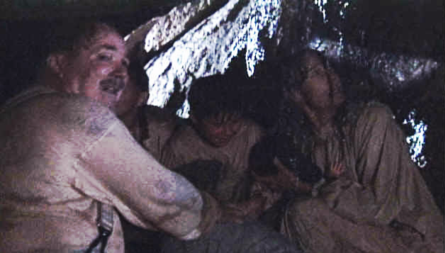 The film's co-producer, Mike Gallagher, doubles as the water truck operator.  Mike arranged for two tankers to provide water for the rain scene.  The rig on the left is a 3,500 gallon water truck donated by Butch Kelly and the rig on the right is a 1,000 water trailer donated by Terry Harris.   Both rigs had self-contained pumps which allowed us to create the rain effect.
Photo by Rod Middleworth

​It is now August 7, 2006.  More than three years of hard work and perseverance have led to something wonderful and unexpected.  The creation and funding of the Wild West Country documentary project was the catalyst for the creation of a new Digital Media Center of Excellence in Lake Isabella, under the guidance of the Kern River Valley Educational and Cultural Foundation and Cerro Coso College.

"Luck is what happens when preparation meets opportunity."  Seneca.  5 BC - 65 AD 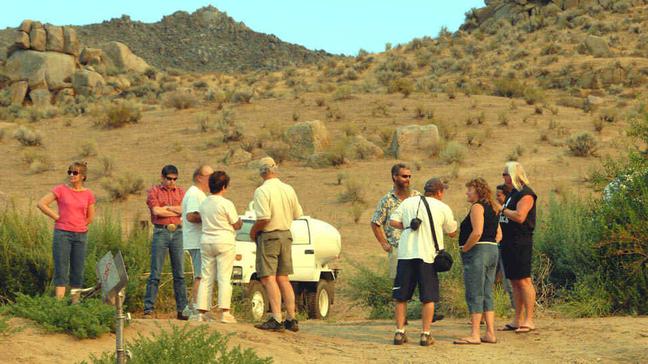 Thomas H. Smith (Rod Middleworth) struggles to save his family from a flood in this re-enactment for the historical documentary, Wild West Country.  In this true story, the Smiths escaped a devastating flash flood of the South Fork Kern River on a cold, dark winter night in 1868.  These frames were taken from the actual footage. 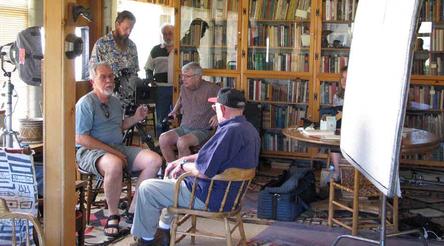 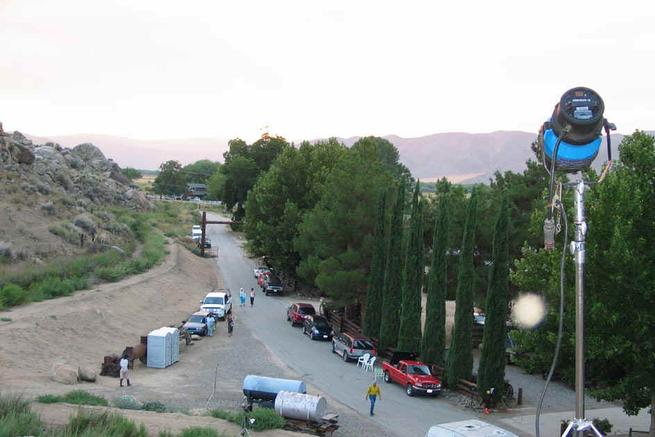 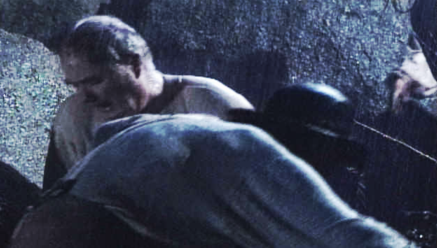 "Be careful what you wish for."   Gene Wilder, "The Lady in Red"

WILD WEST COUNTRY", is an 'Old West' history documentary series about California's Southern Sierra Nevada region.  It began production in June, '06.  The series is based on nine books written by the late Cowboy-Historian-Author, Bob Powers.

The project is being produced with grant funding from the Josh Gordon and Roberta Piazza Gordon Charitable Trust, through the Kern Community Foundation.  Funds are being administered by the Kern River Valley Educational and Cultural Foundation.

The following article is about the first two months of production of the documentary series.

This page is under construction.