Above: The woman Robert has fallen for is 'Claire', played by Audie England.

Robert and 'Sean', played by Patrick Van Horn, are regulars at the club and spend lots of time chasing women together. But Robert meets someone special and begins to abandon Sean and other male friends.

Above: Marlena, the club owner, played by Debra Van Valkenberg, is aproached by Bill, who has finally -- with Robert's encourgement -- mustered the courage to talk to her.  But Bill has had a bit too much to drink.  Despite heroic effort, Marlena shoots him down in flames.

Above: Bill (Shatner) and Robert (Rafer Weigel) check out the scene at The Garden of Eden, one of  the clubs where Robert and his friends hang out. Robert has just learned that his fantasy hero has trouble meeting women, so he's trying to help him out.

An Inexpensive "In Camera" Special Effects Shot For "Free Enterprise"

ABOUT FREE ENTERPRISE ON WIKIPEDIA

The camera package was an Arri BL 4s and a set of 5 Ziess Super Speed primes, consisting of the 18, 25, 35, 50 and 85 mm lenses, plus a 135 mm Ziess, t2.0.  Director Robert Burnett and I like to use primes only, because if forces us to really think through choices about where we're putting the lens, what focal length we're using and how we're moving the camera and/or actors.  Too often, with a zoom lens, we end up zooming when we should be moving the camera or simply adjusting the blocking. 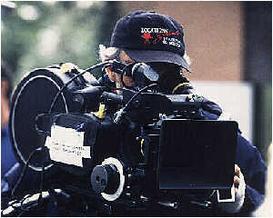 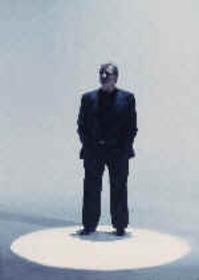 Shatner gives them nothing but wrong advice on subjects like love and the theater: Shatner confides the mission he considers his personal final frontier -- an epic musical on Julius Caesar. 'I know it's a ridiculous idea to do Caesar as a six-hour musical, with me playing all the parts,' says Shatner, 'but I know I can pull it off!"

The film culminates with Shatner belting out the historical rap tune 'No Tears for Caesar.' The pic is directed by...Robert Meyer Burnett from a script he wrote with Mark a. Altman, and Shatner follows John Malkovich -- booked to star in 'Being John Malkovich' -- as a good sport not above poking fun as his serious onscreen image."

Notes on the Photography

"SHATNER RETURNS: Distributors will get their first peek on Thursday at 'Free Enterprise,' a film...that is reminiscent of 'My Favorite Year," and undoubtedly boasts the oddest moment in William Shatner's singing career since his hallucinogenic '60's rendition 'Lucy in the Sky With Diamonds.' 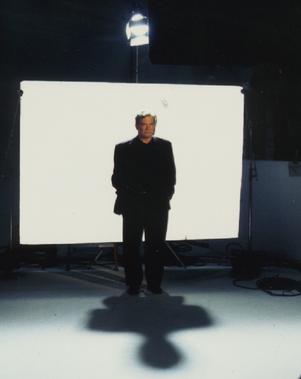 Robert and Claire have much in common, but Claire begins to see how irresponsible Robert really is.

Eventually she confronts him and the breakup scene is at sunset, on this hillside, facing the ocean.

Above: Robert's friends 'Mark' (Eric McCormack) and Sean try to convince Claire to come back to Robert, who they fear has become terminally depressed. The 'speech' made by Mark to Claire -- a plea to return to Robert -- is reminescent of a speech made by Captain Kirk in a Star Trek episode. Free Enterprise is full of such 'gems' from throughout the science fiction genre.