together to create a critical mass and thus a self-sustaining chain reaction.  Little Boy was dropped on Hiroshima on August 6th, 1945.  Fat Man used the "implosion-type" method which proved more efficient, though somewhat more bulky than the gun-type.  Fat Man was dropped on Nagasaki on August 9th, 1945.

The Manhattan Project was certainly the most costly and controversial military-industrial project up to that time and perhaps for all time.  By 1944 it was costing over 1 billion dollars per year, in 1944 dollars.  Some say it was worth it, in both lives and dollars ultimately saved. Some say it should never have been done.  The argument, and the moral dilemma, will likely go on for eternity. 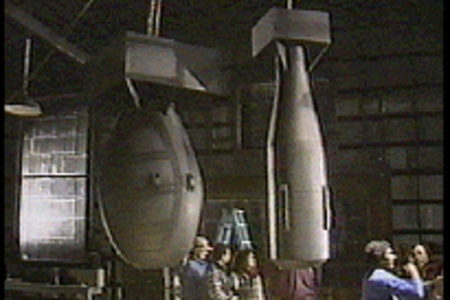 The title, "Fat Man And Little Boy", refers not to Groves and Oppenheimer as some have mistakenly assumed, but rather to the nicknames given to the first two types of devices produced as a result of the Manhattan Project.  Little Boy used the "gun-type" method of compressing two subcritical masses of fissionable material

country the biggest stick in the playground.  Oppenheimer, on the other hand, was torn.  He was a man of peace, who probably believed that if we didn't get the bomb first, the Germans would.  He was also a nuclear scientists and a human being who couldn't resist the temptation to take his life's work to its logical conclusion. 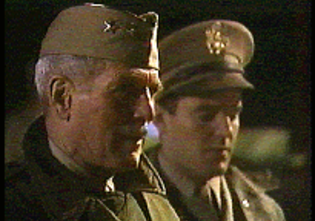 Paul Newman had a different, more pragmatic and perhaps more reasonable view of the historical truth of the story.  He believes that Oppenheimer was no Faust and Groves no Mephistopheles.  Each had a job to do in the interests of their country and each did it fiercely.  Each, in his way, was a patriot.  But Groves, as a military man, simply saw the Atomic Bomb as a way to end the war and a way to give his

representative of America's intellect, a man of peace, who found himself entwined in a Faustian bargain.  They focused on the epic nature of that conflict, which changed the world forever. 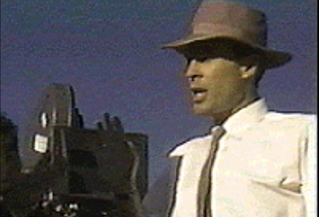 Joffe, his co-screenwriter Bruce Robinson and producer Tony Garnett, chose to focus on the human rather than the technological elements of the story. They saw General Leslie R. Groves (Paul Newman), who headed the military side of the Manhattan Project, as representative of America's muscle, a man of war, even, as Joffe said, an "intellectual thug."  They saw J. Robert Oppenheimer (Dwight Schultz) as

most interesting, entertaining and educational.  It was also in keeping with the way Roland Joffe likes to work.  According to Dwight Schultz, Joffe brought actors and real scientists (who played supporting roles) together like "protons, electrons and neutrons" in this remote location.  They couldn't help but mix and feed each other in ways that created and contributed to an atmosphere of authenticity.

The bulk of the cast and crew stayed in a hotel in Durango and would make the trek up to the location and back each day in vans and buses.  One of the interesting things about this production was that at the hotel the production company installed a well stocked library of films and literature about World War II, The Manhattan Project, Los Alamos and the Bomb.  This material was completely available to the cast and crew and made evenings at the hotel 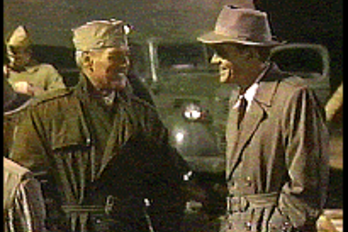 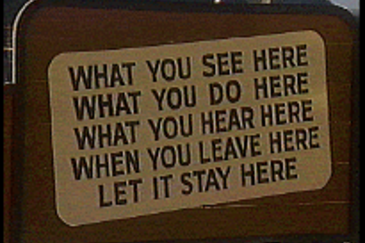 company received some cost breaks in exchange.  Everyone on the production team speculated on whether the buildings would last or not.  It seemed a good bet that they would, if placed on proper foundations.  I've always wondered what use the Mexicans found for them.  If anyone out there has the answer I'd like to know.        (CLICK HERE TO FIND OUT WHAT DID HAPPEN TO THE SETS)

The construction was light weight, to be sure, but probably not much more so than the army barracks-style construction of World War II. Probably the most significant difference was a lack of concrete foundations.  These buildings were constructed on wooden "sills".  Apparently the film makers struck a deal with the Mexican Government in which they would leave the sets "intact" after the filming.  I'm sure the movie

The sets were built on a very remote site, about an hour's drive from the nearest town, which was Durango.  Unlike normal movie sets, most of the buildings in this one were real, with four walls and a water tight roof. Even the interiors of many of the buildings were fully constructed and these interiors were heavily utilized during filming, not only as interior sets for the film, but as office and storage spaces, even living spaces for guards and other personnel. 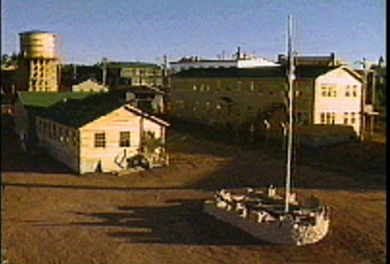 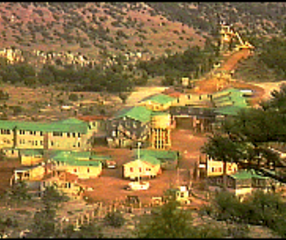 The Los Alamos sets really were incredible.  Joffe and producer Tony Garnett brought the production to the rugged mountains of Mexico and built one of the largest movie sets ever--up to that time.  They virtually recreated the town of Los Alamos as it was in 1943. It took 150 carpenters and a huge number of laborers, working six days a week for six months, to build these sets.  They then peopled the replica town with a cast of 60, hundreds of extras, a large production staff and more than 50 military and civilian cars and trucks of the period.

Sound man Paul Oppenheim and I worked on the project a total of 16 days on two separate trips, with documentary film Director Michael Dante.  We traveled to Durango, Torreon and Mexico City, but the bulk of our time and energy were spent on the main location, the replica of Los Alamos near Durango. We produced an hour long featurette which never saw the light of day, but was reduced to about an hour's worth of "moments" for Press Kit use; the fate, alas, of most behind the scenes documentaries. We work hard to produce a cohesive product and the lions of commerce rip them to shreds to feed their young. Oh well, at least I know they're nourishing.

"Fat Man and Little Boy", Directed by Roland Joffe (left), was shot entirely on location in Mexico.  There, near Durango, in an area which greatly resembles the geography and climate of Los Alamos, New Mexico, they built an authentic replica of the original town, using old plans, photographs and even a few consultants who had actually worked in the original town. 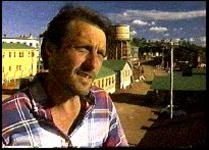 In November and December of 1988 I was hired by Paramount Pictures to film a behind the scenes  documentary on the making of this historical drama--starring Paul Newman, Dwight Schultz, John Cusack, Laura Dern, Bonnie Bedalia, John C. McGinley and Natasha Richardson -- about the Manhattan Project, the building of the first Atomic Bomb.   All of the following photos are frame captures from my work on the documentary.